↓
Home Menu ↓
Home→Czech→Adjustment, after the fact 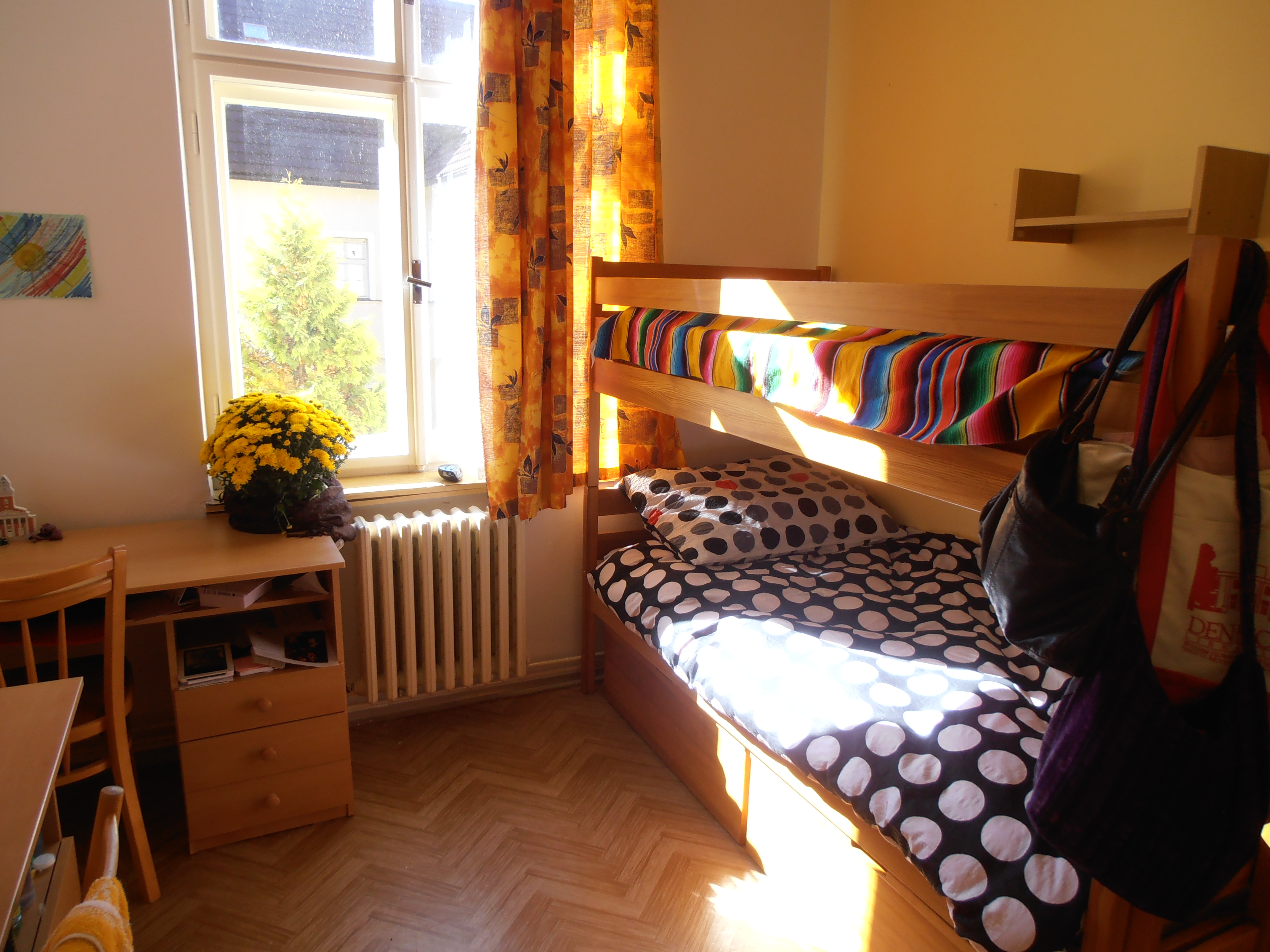 My dorm room in the convent

I wrote this at the beginning of September, shortly after arriving in the Czech Republic.  It seemed a little angsty to post at the time, but it’s interesting to read now.  Maybe not everyone works like this, but it’s a pretty nice sketch of what happens to me when I uproot and start settling into a new place.

If you get the same illness often, you start to learn the signs early on.  As a music student I obsessed over the tiniest dry spot at the back of my throat because even a common cold meant I might not sing properly for weeks.  I always had ample medication on hand in case it got worse.

That’s how I feel about my current condition—culture shock, homesickness, jet lag, the sheer newness of everything mixed up together.  I’m surprised how much of it is familiar, even though it’s been years since I went this far away from home.  Most prominently it means emotional swings.  With relatively little in between, I spend my days either through the roof with joy to be here or wishing I could just be home.  Several times now I’ve heard an alarm-clock sound and thought, “am I going to wake up now?” Either because it’s too good to be true, or because the adventure was nice but I’m ready to cook breakfast in my very own kitchen.

There are other things that feel familiarly out of place—I spoke plenty of Czech today and now there’s fatigued muscles in my tongue, jaw, and parts of my face I never paid attention to before.  A conversation that goes beyond small talk with anyone is a prize I would put up on the fridge if I had one.  I think my dormitory and school smell like Spain, and I’m not sure why.  Maybe it’s the construction materials, the air, a little catholic-ness about it.  I get tired faster and need to be alone, but alone-ness can be dangerous—solitude with relaxing music and a familiar book can be a recipe for homesickness.

With a thousand new things happening every day, my grey matter gets clogged with too many stories to tell.   There’s no one I can tell everything to, but even as I do things and meet people, a corner of my mind is composing these experiences into messages or conversations to share with someone else.  Sometimes I’m overflowing by the end of the day, and there’s simply nowhere to put it all.  During my exchange year in Spain five years ago, I journaled obsessively and excessively, to the point of inhibiting meaningful interactions with real people.  In retrospect I chalked this up to introverted homesickness.  But I’m realizing now that, at least for the first few months, my writing didn’t stem from loneliness.  There was just too much world in one day to keep in my own head.  Sheer excess of thoughts to process nearly rendered me mute at times, and my journals served as a sort of external hard drive to make room for the next day.

So I know well enough to expect this all to stay the same, even heighten, in the next few weeks.  When I’m feeling great, I enjoy it.  When I struggle through Czech, I tell myself there’s a light at the end of the tunnel but I probably won’t see it for another month.  There’s a lot of overhead that goes into strong relationships, and it’s exhausting to be friendship-building with everyone I know at once.  But even when I’m wishing I were home, I try to experience all the emotions as they come while knowing they are both real and transitory.   Just like in Spain, I write letters and sing old songs and slowly but surely make friends, but this time I’m not so whiplashed by mood swings that I’m scared to ever get pregnant.

I guess I have grown up a little.